"The guitar is a whole lot more than a guitar...
there's a whole attitude towards life wrapped up in it"  (Charles Fox)

Our final show of the season:


Spanish songwriter and Latin Grammy Winner Diego Garcia (Twanguero) is considered by many as one of the best guitarists in Spain and is internationally renown for his unique sound of Spanish guitar, American folk, flamenco and tango, and for his impeccable fingerpicking.

For this concert he will be presenting his new release “Backroads, Vol 2”, a gorgeous solo set conceived and recorded during his Covid sojourn in the jungles of Costa Rica. Expect the exquisite finger picking style of classical Spanish/Flamenco guitar.

” … Twanguero is a journey into the heart of the music … “

Eat, drink, listen, tap your feet, clap your hands and smile at SOhO.

"It’s one the most beautiful experiences I know. Someone has spent a lifetime learning how to get the most beautiful sound possible out of an instrument that someone else has spent a lifetime learning how to build those sounds into…and we come together to play what a similar human has done with writing music. And finally, the whole thing merges when fellow music lovers come to hear and see it all. Many good things happen in this life, but none better than this."

Details to be Announced Soon

"The Celebration was one of the all around most meaningful and entertaining experiences I have ever had and I thank you from the bottom of my heart..." (SBAIC'16 attendee)

We are extremely fortunate to host three of the finest musicians in the world this winter.

And all for just $75 with priority reserved seats for the season.

Send a note below if you're interested in joining in.

Individual concert tix will go on sale in December.

John Jorgenson (manouche guitar, bouzouki and clarinet) and Rory Hoffman (guitar, accordion and piano) are the two of the most versatile musicians that I know of; they can play just about anything on any instrument, and in his outrageously hot Gypsy Jazz Quintet will be accompanied by guitar, violin and percussion.

Jorgenson’s dynamic Quintet and its authentic gypsy jazz - the string-driven swing created by “Django” Reinhardt and Stephane Grappelli in 1930s Paris - has been hailed the “U.S. ambassadors of gypsy jazz.” His Quintet is the only American act to ever headline the prestigious Django Reinhardt Memorial Festival in France, and has been featured at “Djangofests” in the US, UK, Germany and Canada. Jorgenson’s compositions for the Quintet additionally draw in elements from Latin, Romanian, Classical, Rock and Greek music.  One of the elite gypsy jazz players in the world, he portrayed Django Reinhardt in the film “Head in the Clouds”.

John is music virtuoso across multiple genres, known for his exquisite licks and world-class musicianship on acoustic guitar, bouzouki, clarinet and vocals for this show as well as mandolin, saxophone and pedal steel. He has contributed to numerous GRAMMY®-winning and platinum-selling albums. The Quintet includes four additional distinguished musicians: Casey Driscoll on violin; Rory Hoffman on guitar, piano and accordion; Simon Planting on bass and Rick Reed on percussion.

“A mix of soulful romance and rollicking celebration, with Jorgenson’s fingers a blur that created avalanches of notes and chords, his dazzling prowess often caused listeners to gasp at the speed and sound…” - All About Jazz

“Jorgenson’s dexterity, speed, and beauty on acoustic guitar were astonishing, and one could only watch in awe…I struggle to think of a more accomplished guitarist I have seen on stage.” - No Depression

“John Jorgenson has insanely fast fingers – they’re nothing but a blur when he’s notes-deep into a song.” – NPR

Becca Stevens has had to postpone until the fall, when she will present her latest musical creations.

A replacement will be announced ASAP

If you saw Clive Carroll with us in 2018, you know that he’s not only a an phenominal guitarist, but put out an incredible effort to fly through a blizzard to get here and put on a fantastic show.

His masterful compositions, coupled with his versatility and unparalleled technical virtuosity, have rendered him one of today’s most admired and respected guitarists. When I asked Tommy Emmanuel who was the next great guitar player, he immediately said "Clive Carroll".

Born in England, Clive's breadth of musical curiosity was to become one of his strengths; even as a child Clive was as comfortable accompanying a group of folk singers as he was jamming along to Nirvana or performing standards with the Essex Youth Orchestra. Clive earned his 1st Class Honours Degree in Composition and Guitar from the famed Trinity College of Music in London, balancing his classical work with forays into the world of the steel string guitar with an album’s worth of solo acoustic music. A chance meeting with English guitar legend John Renbourn proved the catalyst for Clive’s debut album, “Sixth Sense”, which Renbourn deemed “a milestone in the journey of the steel-string guitar”.

Clive has established himself as one of the world’s premier acoustic guitar players. He has toured across Europe, Australia, the Middle East and North America, garnering praise for his sublime performances of everything from 16th and 17th century lute music to Jazz standards, Blues, Irish reels and his own groundbreaking compositions.

“...arguably the most accomplished fingerstylist in the world today...” - Total Guitar Magazine

These 4 concerts are included with the Acoustic Club Season Subscriptions for just $95 - another bargain!

Individual concert tix will go on sale during the winter.

The international Transatlantic Guitar Trio is a unique, phonetic highlight. Fingerstyle guitar champion Richard Smith (UK), Gypsy Jazz virtuoso Joscho Stephan (Germany) and the brilliant multi-instrumentalist Rory Hoffman (USA) joined forces and performed their first, incredible, live gig together for us in 2019. It is unique how they put together gypsy swing standards, country, jazz ballads, and original compositions to create a broad repertoire of songs by the great role models such as Django Reinhardt, Chet Atkins and Jerry Reed.

“Richard Smith is the most amazing guy I know on the guitar. He can play anything I know, only better.” - Chet Atkins

“If you like my playing, you should hear Richard Smith! The world champion!” - Tommy Emmanuel

“Guitar playing at its finest. Don’t miss this one.” - Doyle Dykes

“He is one of the world’s greatest guitarists.” - Muriel Anderson

Joscho Stephan has not merely absorbed the music of the legendary jazz guitarist Django Reinhardt, but interprets Gypsy Swing music on the highest level, is actively engaged in extending its boundaries and has played his way into the illustrous circle of the finest Gypsy Swing musicians in the world.

Rory Hoffman is a Nashville based multi-instrumentalist, playing over a dozen stringed, keyboard and wind instruments. Rory's skill and diverse interests in country, western swing, jazz, polka, latin, gypsy jazz, bluegrass and gospel music has led him to play the Grand Ole Opry numerous times as a soloist and as a sideman with Ricky Skaggs, Kathy Mattea and John Cowan as well as part of the John Jorgenson quintet.

"Here in the undisputed guitar capital of the world, you have to be pretty spectacular to drop jaws. But when Rory Hoffman takes a solo, that’s usually what happens. But what’s most astounding is that he is just as phenomenal on saxophone and clarinet. And accordion and bass. And harmonica and mandolin. Oh yeah, and drums too. And banjo. And keys."

In his 50-plus years of playing the instrument, Carl Verheyen has created a wildly successful, multi-faceted career. He is a critically acclaimed musician, vocalist, songwriter, arranger, producer and educator with fifteen albums and two live DVDs released worldwide. Carl is commonly regarded as a guitar virtuoso capable of playing any style of music with remarkable mastery and conviction. He has been one of LA’s elite “first call” session players for the past 38 years, playing on hundreds of records, movie soundtracks and television shows. As a solo artist, Verheyen has graced the pages of countless industry publications and been the subject of numerous articles chronicling his rise to the forefront of the modern day guitar scene. Carl has won numerous polls and musical honors in the US, Germany, France, Italy and the UK.

A member of the British rock group Supertramp since 1985, Carl has played to millions of enthusiastic fans in sold out arenas worldwide. As the creative force behind the Carl Verheyen Band, he has released an impressive and eclectic discography that showcases his endless talents across a wide array of musical genres. The CVB tours all over the world and continues to draw fans on the festival circuit as well as theaters and clubs.

A much sought after studio musician, Carl plays on other artists’ CDs whenever his busy schedule permits. He has recorded and played with a virtual who’s who of the music industry. His vast collection of movie soundtrack and television credits is enviable. 67,000,000 people heard Carl as a featured soloist at the 2009 Academy Awards. He is also heavily featured in the documentary film about the electric guitar called Turn It Up!

“Verheyen’s guitar work will blow you away” - Guitar Player Magazine

Becca stretches the boundaries of convention with songs that weave together her classical and Appalachian folk music upbringing and her love of the rich rhythms and harmonies of jazz and world music, enhanced by her skill on multiple string instruments. Along with her solo output, Becca is a highly respected collaborator who has worked with the likes of David Crosby as an active member of his Lighthouse Band, Jacob Collier, Michael League (Snarky Puppy), Brad Mehldau, Esperanza Spalding, Chris Thile, Laura Mvula, José James, Antonio Sánchez, Cory Wong, Vince Mendoza, Metropole Orkest, Timo Andres, and Attacca Quartet, among many. She defies labeling and continues to challenge the notion of what a singer-songwriter should be. Instead, she dictates to the rest of us what we should (and should not) expect from artistry such as hers.

Her most recent album, WONDERBLOOM, displays Stevens’ skill of layering profound and discerning lyrics with funky and dance-ready beats in a record that Jazz Magazine described as “sophisticated and sensual pop” and The Mail on Sunday said is “Glamorous…semi-electric pop Prince might approve of.” The track “Slow Burn” from WONDERBLOOM was nominated for a GRAMMY for Best Arrangement, Instruments and Vocals in 2020.

So Much Great Music!

It's been an honor & privilege to host live music

freedom of expression to do what they do.

Don't take it for granted ~ get out and enjoy it while you can;

the musicians and venues need your support now more than ever.

The Hot Club of Nashville

"Acoustic music is the timeless sound of nature and resonating materials – wood, bone, gourd, gut and skin. It predates the spoken language of modern culture, crossing all borders and barriers. It speaks to great, universal truths of very personal, yet familiar stories. Those stories keep legacies alive, allow them to be shared, and create new ones going forward".

Music is unparalleled in its impact across civilization; it is infinite and evolving across time, place, religion and culture. It is the door to our souls, the balm for our spirit, an inspiration to feel deeply, our common language, and the heart of community.

The humble guitar is known for its enormous musical versatility across all cultures and genres. It has been the voice of people to tell their stories, and attainable to everyone regardless of wealth or social status. 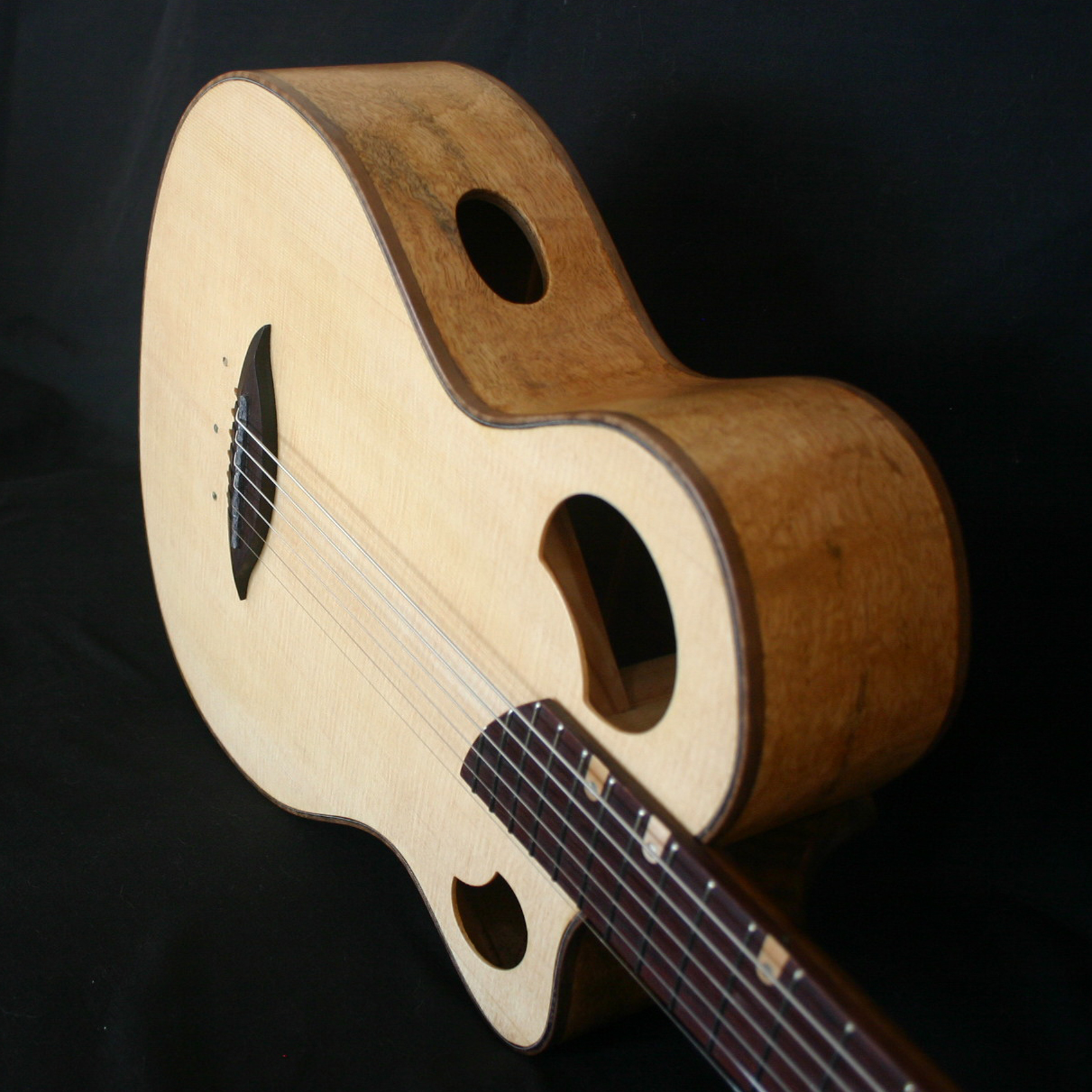 "The guitar can truly change the world...we've seen that in ministry and education;
it has affected international borders. It's a very dangerous tool." (Richard Hoover, with a smile)